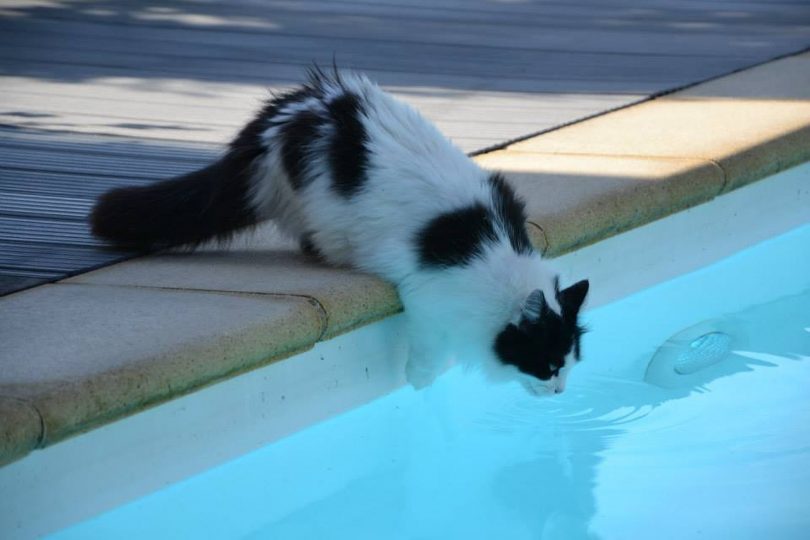 Most people simply assume that cats don’t like water. In fact, this may be something that you have learned the hard way when you tried to give your feline friend a bath. So, the idea of them swimming may seem downright crazy.

Well, it may actually not be as insane as you would imagine. If you enjoy cat videos on the internet (and who doesn’t!) you will have come to realize that there are some kitties that actually love taking a dip. To get a better understanding of cats, their relationship with water, and whether or not they can actually swim, take a look at the facts below…

Cats and Water: A History Lesson

If you thought that your kitty descended from lions and tigers, think again. While they may belong to a similar family, the domestic cat had other origins. Researchers discovered a while ago that household cats actually evolved from the Near Eastern wildcat. This original kitty could be – and still is – found along the Fertile Crescent.

That is to say, these cats lived in the deserts of Saudi Arabia, Israeli, and other countries in the Middle East. Due to this, it was unlikely that these felines had too much contact with bodies of water. So, there was no need for them to get used to them or even like them.

Of course, cats have been moving around with humans for around ten thousand years now. So, it stands to reason that some of them will have lived around watering holes and thus, grown to like water. In truth, there are several breeds that actually enjoy being in the water. Here are the most common ones:

So, if you have one of these cuties at home, they may not mind the water so much. You may even notice that they spend more time around sinks, showers, and other sources of water.

One thing that you may have noticed about your kitty and others is that they don’t like getting their fur wet. Since this is a pretty big part of swimming, this does explain why more cats are interested in taking a plunge. However, this does lead to an interesting question – why don’t cats like getting wet?

Here are some of the top explanations for this:

Let’s get to the root of this question, though, do cats have the capability to swim? Well, it turns out that cats, like many other mammals, are able to swim. This is probably a survival instinct that has been passed down from generation to generation.

Therefore, if your kitty were to fall into a pool of water, there is a good chance that he or she would automatically start paddling their little legs. In doing so, they would be able to keep themselves afloat for a while. So, yes, cats can swim.

The Dangers of Cats Swimming

This doesn’t mean that it is fine for you to let your cat swim in your pool – even if they wanted to. While cats are good swimmers, there have also been instances of them drowning. As such, you do need to be incredibly careful with cats being around deep bodies of water.

The main reason that cats drown is because they can’t get out of the pool of water that they have jumped or fallen into. Remember, they have rather small bodies and relatively short limbs. Thus, it can be rather difficult for them to clamber out of swimming pools, ponds, and other watery holes.

So, if you do have a swimming pool at home, know that you need to take the necessary precautions. This can include:

Can You Teach Cats to Swim?

If your fur baby is really not a fan of water, then it is best to leave him or her be. Trying to get them acclimatized to water just stresses them out unnecessarily. After all, unless you are planning on being marooned on a raft with your cat, they probably won’t need to know how to swim.

That being said, you can reduce your cat’s aversion to water. Eventually, they want to try their paws at swimming. Here are some tricks that you can try to get your kitty to like water:

As you can see, there is a lot more about cats and water than you could have possibly imagined. The next time you are wondering just all of the hidden talents your kitty may have, know that swimming is one of them!