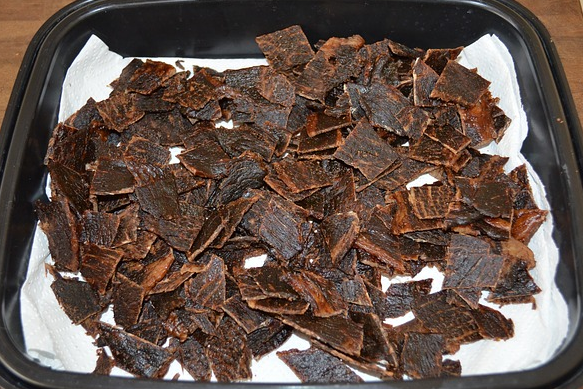 Every dog owner knows how dogs genuinely enjoy being given people foods as treats. However, feeding your furry pet human foods on a regular basis is not a good idea, especially when it comes to some particular foods. Many dog lovers use beef jerky as a behavioral treat but can dogs eat beef jerky for sure? The answer is no. As a matter of fact dogs shouldn’t be given beef jerky treats for various reasons. Let’s get more detailed information on beef jerky and learn why you shouldn’t feed it to your canine buddy.

Can Dogs Eat Beef Jerky – No

According to specialists, beef jerky treats are considered sickening and deadly for your furry pet. In 2007, it was estimated that appreciatively 3000 dogs and 10 cats have become sick while 600 dogs have died because of this toxic snack. These sad instances have been linked especially with beef jerky manufactured in China. They were filled with harmful chemicals that seemed to be utterly toxic to canines in particular.

What makes a beef jerky so appealing for canines is the crunchiness and chewy feature. While this treat is quite popular for training dogs, it presents harmful effects. If you wish to provide your furry pet with beef jerky snacks, you should consider opting for naturally prepared one, as it is chemical-free. Additionally, you should make sure it’s not as spicy as regular beef jerky.

Whatever type of beef jerky you may find at the store, it is not recommendable for canines. Their richness and spiciness is harmful for dogs. While you could consider washing the treats in plenty of water before feeding them to your pet, unfortunately that still won’t remove all the spices, some of which being entirely poisonous.

The true causes are unknown why jerky treats are harmful for dogs. Many are blaming the Chinese manufacturers or the spices in jerky. Jerky treats have also been tested for metals, pesticides, Salmonella, antibiotics and many other poisonous compounds and chemicals but the exact cause of problems are still uncertain.

What makes beef jerky irresistible to both humans and dogs is its spices. The beef is filled with high amounts of sodium that makes it last longer on the shelves of the supermarket. Additionally, beef jerky is filled with onion powder, garlic powder, and pepper – all of which are risky and even toxic to dogs. Dogs shouldn’t’ be given salty or spicy treats. These can harm their health while garlic and onions are considered foods that you should never feed to your canine buddy.

Salty treats can make your furry pal suffer from excessive thirst and urination. The high amount of salt in beef jerky can further lead to the occurrence of different symptoms including diarrhea, seizures, depression, convulsions, vomiting and even death. Not even low amounts of salt are recommendable for your pet. You need to understand that the dog’s digestive system is entirely different than humans, which makes beef jerky treats a definite no when it comes to approved foods for canines.

Dogs affected by this toxic treat will suffer from a range of severe gastrointestinal problems including vomiting and diarrhea, and sometimes even liver damage. As I already mentioned, the first symptoms that normally occur are excessive thirst, sometimes weight loss, and abnormally frequent urination. Most dogs that suffer from beef jerky’s side effects can recover from the condition if treatment is administered promptly. However, if the gastrointestinal problems are too severe, it can lead to pancreatitis, kidney failure, and serious blood pH problems.

If you feed your canine buddy large amounts of commercially prepared meat products, he will undoubtedly suffer from gastrointestinal problems. While some of manufactured meats might not encompass high salt/spices content, that still doesn’t make them approved treats for canines.

Specialists advise dog owners to pay attention to their dog’s behavior if consumed beef jerky without their knowledge. If you notice that your furry pet is feeling down and suffers from the adverse effects of beef jerky, the first thing you should do is contact your vet and take your dog for observation. Recovery is possible if you bring your pet to the vet as soon as possible. This is a serious issue since it has caused the death for many dogs.

Can Dogs Eat Other Jerky Treats?

No, other type of jerkies have proven to be harmful for dogs as well. It is now known that sweet potato, dried fruit and duck jerkies can also cause an illness in dogs.

To sum it up, there is no reason you should consider spoiling your furry pet with beef jerky, as delicious and tempting it may be for him. Dogs love it, but they also love other treats that are healthy and recommendable. Thus, you should opt for healthier treats instead. The high amounts of salt and detrimental spices make beef jerky a harmful treat for your furry pal. Consequently, you should steer clear of buying commercially prepared beef jerky, especially those manufactured in China. The only type of jerky you could try to feed to your pet is the one you prepare yourself at home. However, even with the homemade jerky, you should remain cautious and only feed a little piece to see how your pet reacts.