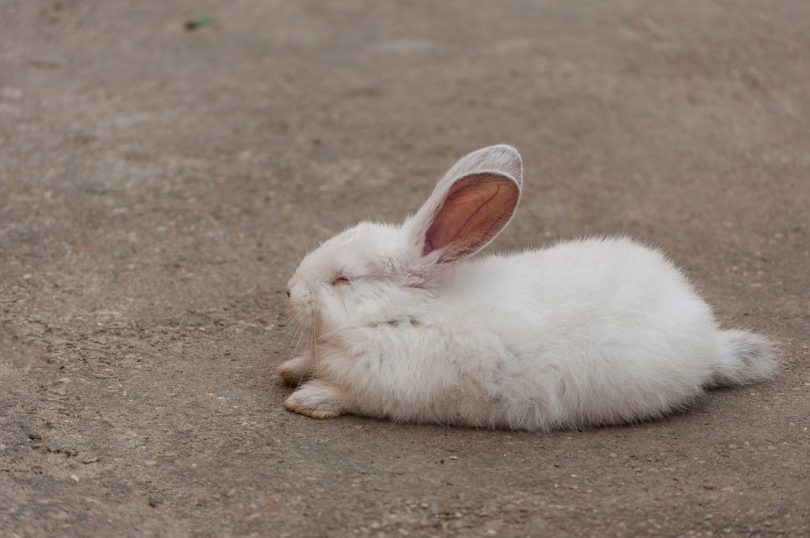 You surely do know the expression to sleep like a rabbit but you probably never gave it much thought. Yet if your little furry friend is a rabbit, you might have noticed he’s got some weird sleeping patterns. So how do rabbits sleep?

If you’ve never seen an actual rabbit sleeping, you might not fully understand the idea behind the expression mentioned above. Shortly, rabbits sleep lighter and more frequent than us, usually during the day. But let’s delve deeper into the matter.

How Do Rabbits Sleep

First you should know that rabbits are prey animals, that is they are hunted by predators and can become lunch right away if they’re not cautious and guard themselves at all times. And that means while they sleep too.

Now you got part of your answer. Rabbits have developed their sleeping patterns in such a way that helps them avoid predators as much as possible.

Rabbits are crepuscular creatures, which means that they are most active during mornings and evenings and sleep during the day. Dusk and dawn are the periods when predators are also very active so rabbits have to be fully awake and active too in order to escape a predator lurking in the shadows.

Some domestic rabbits may adjust a little bit to their new environment, but usually they still keep the same behaviors their wild brothers have. So if you find your little bunny friend napping often during the day, well, leave him be, because that’s their way.

Again due to the fact that they always need to be alert for danger and predators, rabbits have developed different sleep cycles than the ones we normally have.

Rabbits sleep a little bit during the night as well but they wake up periodically. During the day, they sleep more frequent but their sleep stages are shorter and much lighter than ours for the reason stated above, which assures they will wake up if danger is close.

Since they are prey animals, rabbits look for the comfort provided by other fellow rabbits so they will sleep together if possible and often in some cute positions.

Rabbits living in cold climates will curl their bodies while sleeping, to limit their exposure to cold air. In hot climates, they will try to maximize the air flow around their body so they will often sleep laying sideways or on their stomachs with the hind legs stretched out behind them.

Some rabbits even prefer taking a snooze while upright, which ensures quicker reaction times should a predator happen to be around.