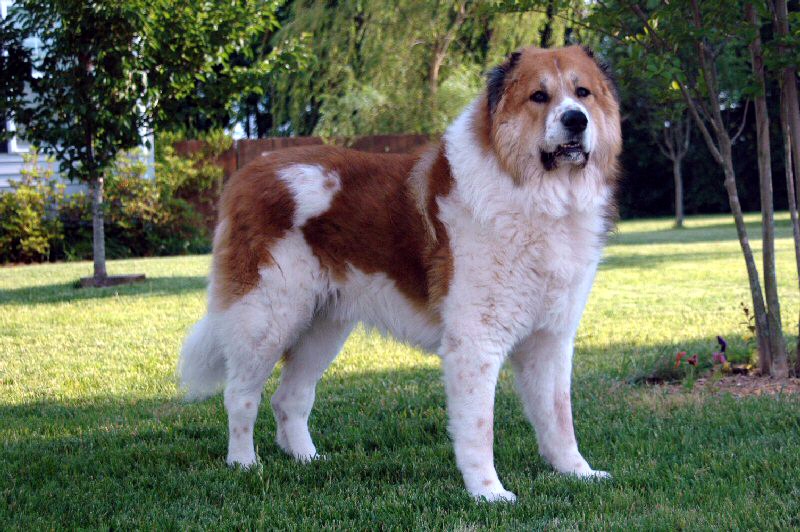 Thinking about getting yourself or your family a fluffy Russian bear dog? Read this article to understand the breed better before you commit yourself to a Russian bear puppy.

Russian bear dogs are also known as Caucasian Shepherds or the Caucasian Ovcharka. They are classified as working dogs.

Unlike German Shepherds and other popular working dogs, Russian bear dogs were not used to herd sheep. Rather, these fearsome looking canines helped farmers protect sheep from wolves.

Russian bear dogs act as guardians. They have a strong rural past and can be trained to be loyal and lovable family dogs.

There are two things that immediately stand out about Russian bear dogs compared to most other domestic breeds:

The breed is historically from the Caucasus mountain region. Russian bear dogs have evolved to have an extra fluffy patch of fur to survive the bitter and harsh winters of the Caucasus.

The fur is the most noticeable feature of this breed. They can appear to be even furrier than Pomeranians, even if their fur is not curly.

The dogs may have dark or white facial markings depending on their coat colors. Russian bear dogs have light or dark coats too. On rare occasions, a Russian bear dog may have a solid white coat.

Another aspect you would immediately notice about this breed is its massive size. Russian bear dogs on average grow between 23 to 30 inches in height. And they can weigh as much as 170lbs. (Hence the name “bear.”)

There are reports of Russian bear dogs growing to the size of a small tiger. In Britain, a rescue Russian bear puppy named Fluffy weighed nearly 44 lbs at the mere age of 11 months.

Here are some other notable physical traits that distinguish Russian bear dogs from similar breeds:

The huge size of this breed creates the impression that Russian bear dogs are fierce or unfriendly. That’s simply not the case. With the right type of care and training, Russian bear dogs can become lovable canine companions to families.

Russian bear dogs are intelligent, strong-willed, and spirited. In their puppyhood, these dogs can be quite playful.

As formidable protectors, Russian bear dogs are naturally suspicious of strangers, both human and canine. They can act out against anything they perceive as a threat.

Russian bear dogs are quick to act. If they sense anything wrong in their surroundings, they will give warning barks. These dogs are highly alert and are expert trackers.

Russian bear dogs may be intolerant of strangers. However, their temperament is quite pleasant when it comes to members of the family.

This breed has a handful of negative traits along with the positives. Russian bear dogs can be fearful because of their guardian-like nature. They may seem skittish to some dog owners.

As spirited as these dogs are, they can be sluggish too. After some hours of playing, Russian bear dogs will display low-energy for the rest of the day. 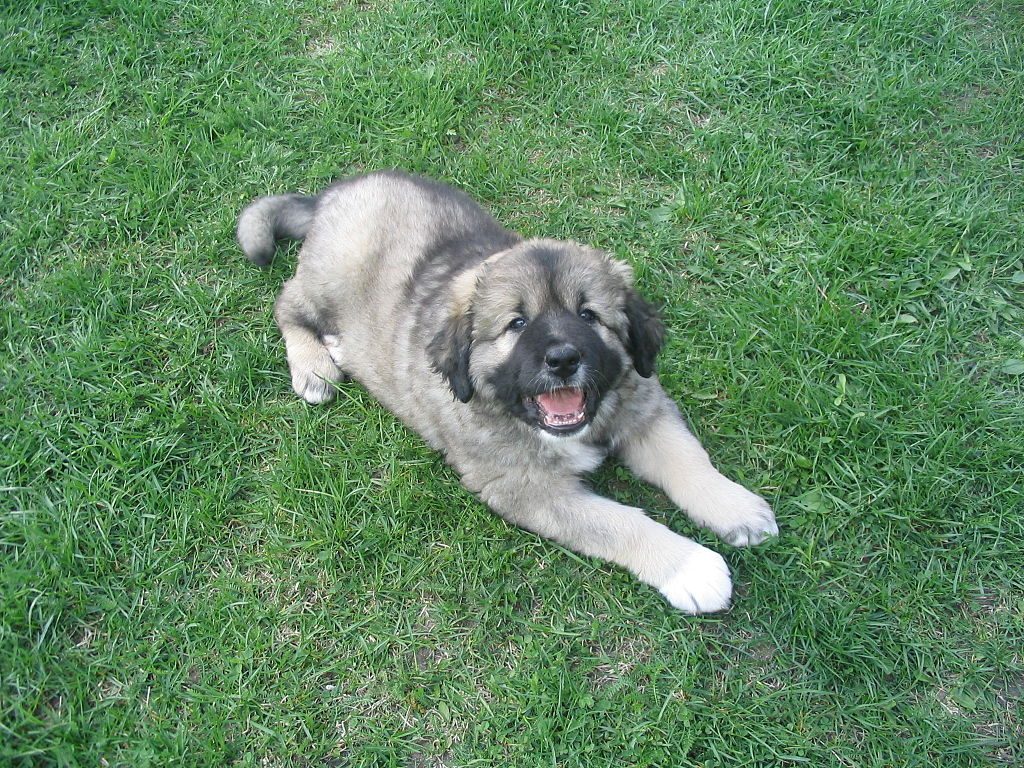 A Russian bear dog can live for 10 to 12 years with proper care. Their puppyhood lasts up to two years, as with other dog breeds.

Russian bear puppies are larger than most domestic breeds. As pups, they may be unaware of their size and require adult supervision when playing.

The Caucasus region is known for its many breeds of mountain dogs, as well as its wolves. Farmers bred Russian bear dogs to be massive and intimidating opponents to wolves that attacked sheep.

The dog breed was so successful that, during the Soviet era, the Russian government used these dogs to protect sensitive facilities like factories.

These dogs are still legendary in Eastern Europe. There are local folktales that portray how faithful and protective Russian bear dogs are.

It’s unknown how old the breed is. But it first came to the notice of people in Western Europe in the 1920s. The United Kennel Club first registered the dog breed in the U.S. in 1995.

Russian bear dogs are hardy and adapt well to new places. They can survive in most kinds of climates.

The breed originally comes from a wintry region. As a result, Russian bear dogs thrive best in colder climates.

Russian bear dogs can withstand heat and high temperatures despite the thick coat. However, owners should provide plenty of water for these dogs in warmer climates.

As each dog is different, some Russian bear dogs may adapt well to hotter regions, while others may not.

This dog was originally bred in rural areas. The dogs evolved as outdoor animals who loved exploring outside. Therefore, owners need to provide enough outdoor space for modern Russian bear dogs to get plenty of exercise.

These dogs make wonderful companions for hiking, trekking, and similar outdoor activities. They don’t like being cooped up in a house like designer dogs.

This dog breed may not be suited for apartment living. Russian bear dogs require a lot of space and don’t take to strangers well.

Because this breed is large, owners often mistakenly overfeed Russian bear dogs with protein. Too much protein can harm a dog as much as too little protein.

Owners should consult with a vet regarding how many calories and how much protein their Russian bear dog should eat every day. A dog’s nutritional needs depend on its particular size.

Russian bear dogs require plenty of exercise to expend energy and keep obesity at bay. The breed is classified as “moderately active,” so owners don’t need to commit to very long activity sessions.

It’s recommended to take a Russian bear dog for a walk for at least an hour every day. This dog loves hikes and treks.

Having a large backyard can fulfill most activity requirements for Russian bear dogs. Give the dog plenty of different types of toys to play with as well.

Russian bear dogs can grow bored and become destructive when they don’t get enough exercise. They are intelligent and need variety, so they would easily get bored with the same type of activity.

Russian bear dogs have a thick, double coat. It keeps them cool in the summer and warm in the winter. This distinct coat requires a lot of grooming.

The dogs need to be groomed daily or at least several times a week. They typically have slightly longer fur that should be brushed every day. If the dog’s fur is on the shorter side, grooming at least three times a week is enough.

Here are the breed-specific diseases Russian bear dog owners should be concerned about:

Hip dysplasia refers to a condition where the dog’s hip bone is not properly attached to its pelvis. The hip bone may not be properly in its socket.

Hip dysplasia is a painful bone-joint problem that requires medical care. This condition can be fixed with surgery in some cases.

Russian bear dogs are particularly prone to hip dysplasia. The disease is believed to be hereditary within the breed. Also, all large dog breeds are susceptible to dysplasia problems.

Hip dysplasia becomes a common problem for Russian bear dogs as they age. The condition usually shows itself in older dogs.

Just like hip dysplasia, elbow dysplasia is a joint dislocation problem. It occurs when one of the front leg joints is not properly attached to its socket.

As with hip dysplasia, elbow dysplasia may cause a Russian bear dog to start limping. Treatment options are limited in both cases.

Cataracts occur in Russian bear dogs the same way as in humans. Cataracts cause the lenses in the eye to become cloudy, leading to blurry vision.

In Russian bear dogs, cataracts can occur as minor problems that only slightly affect vision. However, in some cases, they can cause blindness.

Cataracts are largely inherited in this dog breed. That’s not to say that a Russian bear dog would always develop cataracts in old age.

There are steps that owners can take to reduce the chances of a Russian bear dog developing cataracts. For dogs with cataracts, the condition can be fixed with surgery.

Russian bear dogs must be properly socialized to be able to get along with people and other dogs. In fact, socialization is one of the most important aspects of a Russian bear puppy’s life.

The dog breed is inherently suspicious of unfamiliar or strange things. However, Russian bear dogs are not as fearful as young puppies.

The dog starts distrusting unfamiliar people and dogs at around 12 weeks of age. Owners can help their dogs become friendlier by socializing the puppy during its fearless stage.

It’s recommended to take a Russian bear puppy out in public, such as to parks when it’s under 12 weeks. Being around other animals and people would make the puppy more confident and less suspicious.

Positive experiences in puppyhood are also important for a Russian bear dog to become friendlier as adults. Without the right socialization, Russian bear dogs can grow up to be highly aggressive towards unfamiliar people and animals.

Russian bear dogs are notoriously hard to train. As a large-breed guardian working dog, they are often too smart for their own good.

This dog breed prizes independence and has some aggressive traits. These traits can be controlled with a thorough training program.

Experts recommend training Russian bear dogs as early as possible. Ideally, training should begin in puppyhood. It will take several years to complete the training.

These dogs only respond to positive reinforcement training. They learn through operant conditioning like all other dogs. Meaning, these dogs learn good behavior based on positive rewards only.

To properly train a Russian bear dog, the owner must establish themselves as the leader of the pack. It should be done before and after training sessions. Keep the training sessions short, because these dogs are very stubborn.

What to AVOID when training Russian bear dogs:

Training a Russian bear dog can be hard. But it can be done, as long as the trainer is patient and knows what they are doing.

Living with a Family

This dog breed is a wonderful companion. However, care must be taken when a Russian bear dog is around children.

Russian bear dogs should always be supervised around small children. They may not have the patience to put up with children’s unpredictable behavior.

This breed can become aggressive as well. Therefore, children should be instructed on how to act around the dog so as not to provoke it.

It’s important to note that Russian bear dogs are not simply pets. They are guardian dogs that are best reared for protecting the house.

Should You Get a Russian Bear Dog?

Don’t get a Russian bear dog if:

Prospective dog owners must think very carefully before getting a Russian bear dog, particularly because the breed can become very aggressive when not well-trained.