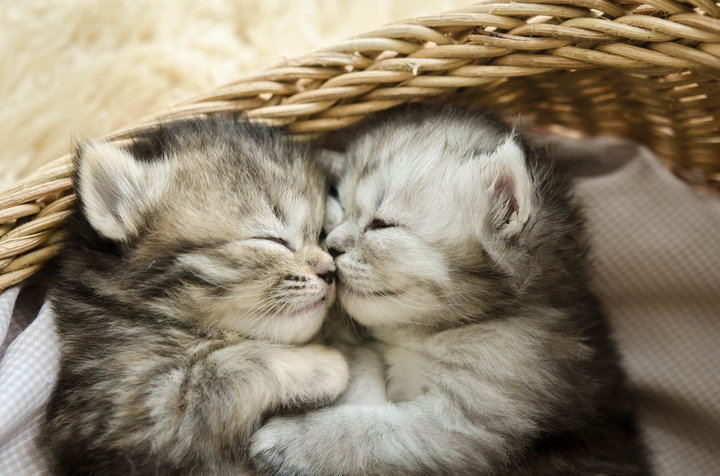 When a kitten first comes out of the womb the film and their closed eyes have a number of reasons for being there, the first is that their eyes need more time to develop after birth, so both these measures act as protections from being exposed to external elements before they’re ready.

What to Look out for when kittens open their eyes

Things like bright lights and the air are damaging for kittens eyes before they are fully developed. The film that covers their eyes produces tears which keep the eyeball constantly moisturized, this remains true of adult cats too who retain a film under their primary eyelids.

Kittens however shed their primary film soon after they start opening their eyes. The film that remains under the eyelid is called a second or third eyelid. Many mammals have it, and it protects the lining of the eye.

If you ever see your cat sleeping with their eyes open, it’s because they have this second or third eyelid closed which covers the eyes. It keeps them protected without having to fully close the full eyelid, which as you can imagine is a definite evolutionary advantage.

A kitten though when young may not be ready to shed their second eyelid or the film which keeps their eyes protected until they are ready to see. Birth can be quite traumatic and so they may need psychological time to adapt to the new world before being exposed to even more new stimuli.

Usually they become ready to see after a few days or a week, and you will notice this opening at first as a tiny slit which will get bigger as time goes on. During this time the film covering their eyes will start falling off.

If two weeks pass-by and their eyes still haven’t opened, then it’s time to see a vet. This is a rare case, but still good to know just in case.

Don’t try to do anything yourself to stimulate the opening of the eyes. Only make sure they stay clean through the gentle wiping with a clean cloth and water.

This is necessary because they will have a black or brown crud in the inner corner of their eyes just as us humans do when we wake up.

It’s a building up of the mucus membrane and it may also be due to an allergy which is nothing to worry about, the kittens eyes are just sensitive when young.

If you see any other odd discharge coming from the eyes or if they start swelling, then they may have an infection. Go to your vet so they can prescribe the right kind of medication to help fight it.

Another problem to look out for though not as serious as an infection is dry or burning eyes. As a kitten’s eyes are sensitive and if the tears or the film covering the eyes have not developed or haven’t produced enough then their eyes can dry up and become irritating.

Look out for any excessive blinking, which indicates that your kitten is trying to moisturize their eyes more than usual. If you notice this, then take them to your vet who will likely give you eye drops to use until they predict your kitten will be able to produce enough of its own tears.